Psilocybin Reconnects Parts of the Brain Damaged Due to Depression 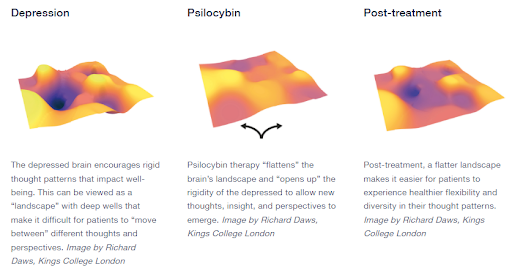 Researchers examined the fMRI scan of 60 patients who participated in two separate psilocybin trials. All participants were diagnosed with treatment-resistant depression (TRD) in the first trial. Researchers informed all patients that they would receive psilocybin.

The second trial was conducted with patients whose depressive condition was not as severe. Of these participants, roughly half were given psilocybin, while the others received a placebo, SSRI medication escitalopram. Both studies received psychotherapy using similar methods.

fMRI scans were conducted pre- and post-treatment. The scans clearly show that participants who received psilocybin had smoother, i.e., less rigid, brain landscapes. This smoothness shows increased connectivity in regions damaged by depression. The repaired areas of the brain are better able to carry novel thoughts, allowing patients to think in new ways, often breaking free of their depressive symptoms.

Researchers also reported that participants were less emotionally avoidant and showed increased cognitive functions. The improvement in their symptoms, brain function changes, and emotional states all correlated with the psilocybin treatment. The control group in the second study, who received only the SSRI medication, did not show as significant an improvement.

“In previous studies, we had seen a similar effect in the brain when people were scanned whilst on a psychedelic, but here we’re seeing it weeks after treatment for depression, which suggests a carry-over of the acute drug action,” said Robin Carhart-Harris, Ph.D., Director, Neuroscape Psychedelics Division at UCSF, published April 11, 2022, in Nature Medicine.

Psilocybin affects the Default Mode Network (DMN) in the brain, suppressing its function. It is thought that this, along with psilocybin’s ability to impact 5-HT2a, temporarily disrupts parts of the brain responsible for repetitive thinking and the retention of trauma. This disruption may allow patients to temporarily snap out of depressive symptoms, making them more open to exploring novel ways of dealing with their condition and more easily influenced by traditional psychiatric treatments. 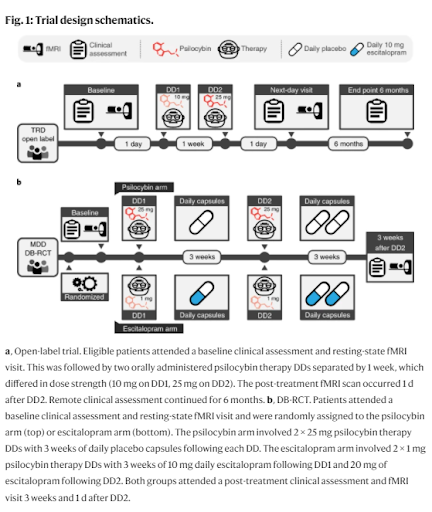 While the study does show promising results, it is important to note that research into psilocybin as a treatment for depression is still developing. Further research is critically needed to progress psilocybin as medication and overcome stigmas associated with the powerful psychedelic medicine.

David Connell is a U.S. Air Force Veteran writer and author of Cooking with Magic: The Psilocybin Cookbook. David holds a B.A. in Communications and Creative Writing from the University of Tennessee, Knoxville. Connect with him about drug policy reform, his thoughts on research in novel psychedelic therapies, creative writing, and his unabashed love for Science Fiction on Twitter, LinkedIn, and Instagram.

Could Mushrooms Have Language Similar to Humans?

No Result
View All Result