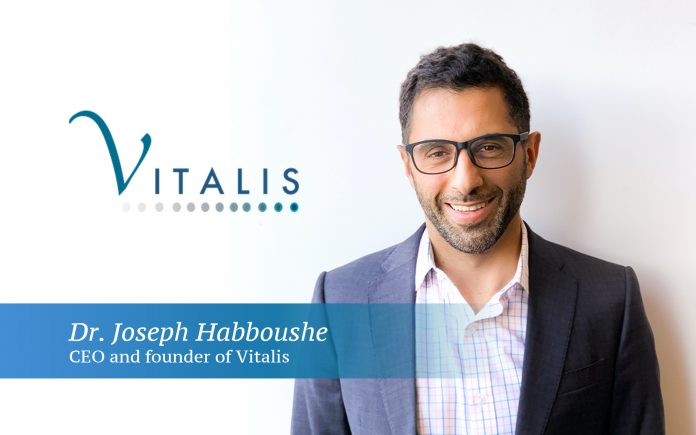 It used to be you had to keep your ear to the ground when on the lookout for news in the ketamine therapy community. Constantly checking different Google Alerts, subreddits, and dubious anonymous forums in search of anything that might be considered an update on this innovative yet sparsely used treatment option.

With so many new stories and advancements being touted on the regular, it can be hard for any individual story to grab attention for long. But when a chance encounter with a representative of Vitalis Pharmaceuticals opened up a new story to my attention, it was difficult not to need more details. I soon reached out and was introduced to the CEO and founder of Vitalis himself, Dr. Joseph Habboushe.

Dr. Habboushe continues, almost as if he forgot to add something. “MDCalc is now used by two thirds of US doctors.”

This exchange reveals a lot about Dr. Habboushe to me. The success of MDCalc, a footnote in his description of his achievements, might be another doctor’s entire biography. It’s telling that Dr. Habboushe thinks of himself, first and foremost, as an emergency physician trying to help people. The success of other ventures is an afterthought to him.

“I still practice. I’m on the frontline.”

When interviewed last year by the Associated Press as part of a piece detailing the role of ER doctors during the coronavirus pandemic, he further elaborated on his feelings about the role he has to play as a healthcare provider during these trying times.

“It feels very appropriate that I get to be on the front lines and try to fight this war. We’re all in this together, and we’re all in with our patients.”

When it came time for my over-the-phone interview with Dr. Habboushe, I was excited to hear about his company’s new research into ketamine treatments for pain. I was more excited to find out if the profile of the man found on the internet really does reflect his desire to help and his work ethic.

I was not disappointed.

The interview started with some background on Vitalis Pharmaceuticals, the privately-held specialty pharmaceutical company trying to overcome the limitations of existing drugs.

Since then, these initial approaches to formulations have been applicable to a couple other drugs, such as multiple sclerosis drugs.

We were able to use the same approach to apply to ketamine to potentially do something which will be a huge breakthrough, if possible.

This will solve the problems with oral ketamine if the trial is successful.”

You likely already know that ketamine is a powerful anesthetic and pain reliever — when administered via intravenous infusion. Other methods of administration, like ketamine pills or intramuscular infusion, have been attempted with varying degrees of success.

One of the more popular variants of ketamine, esketamine (brand name Spravato) was approved by the FDA for use in treating depression in some patients in early 2019. It signaled an exciting shift in the industry, perhaps indicating ketamine could one day be more readily available for treatment of nonemergency conditions.

“I’m an emergency doctor. I’ve worked in many ERs, and I’ve faced the opioid epidemic over the last 15 years. When trying to find a pain medication that is powerful, we just don’t have many options. We have NSAIDs, but they’re limited in what they do. Opiates have a whole host of other problems.

Ketamine is a great option and very popular. It’s a dissociative anesthetic used for moderate sedation. In low doses — subdissociative doses — it’s used for pain medications, which can reduce the number of opioids used.

Ketamine nasal spray can’t even be used at home. We believe, based on the study ahead of us, that we may have an approach that can address this issue.”

I was already intrigued to hear more about Vitalis’ upcoming studies, but this is where they got my attention.

“Other versions of oral ketamine are not bioavailable, meaning it’s hard for the body to absorb it when taken orally. It’s also very important to look at the balance of ketamine in the blood.

In addition to that, we have this specialized aspirin, VTS-Aspirin, we use with these other drugs as well. Aspirin modulates the main receptor of ketamine in ways that we think can solve the main problem, which is efficacy. We’re calling this unique formulation, VTS-K.

If we hit our first goal in this upcoming trial, we think we have a game changer. Our higher-level goal is to find efficacy with ketamine but low enough sedation to give some of this medication at home. That would be our grand-slam game changer.”

Fortunately, we won’t have to speculate on the implications of this study for much longer. Dr. Habboushe assured me that even with COVID-19, their research and trials are proceeding as scheduled.

“Despite COVID-19, where we expected some slowdown, we’re making progress. If we keep at this rate, we could get results in less than a month. If this works, it will become applicable across all uses for subdissociative ketamine. For now, it’s just used for acute musculoskeletal pain.”

The conversation soon turned to what the next steps might look like if the trial is successful.

“We’re already looking at additional studies for some other indications. We’re looking at post-operative pain, acute headaches, chronic pain, and depression in the future. For now, we’re aiming at acute pain to see if we can show efficacy.

If that works, we’ll start looking at FDA approval. One nice thing is that Spravato was recently approved, so we have a sense for what the regulators are looking for.”

It’s hard not to feel a twinge of optimism after hearing about all this. Is it possible that new indications of ketamine and similar medications can signal a shift away from opiate usage? What’s more, could we use ketamine to replace opiates entirely? Dr. Habboushe weighed in.

“If we can reduce opiate use at all, that’s fantastic. Looking at how my colleagues use ketamine in clinical settings, some patients can be treated with ketamine but others may need opiates because of terrible acute or chronic pain. Over time, they become tolerant to opiates and may need a higher dose.

Ketamine for postoperative pain is an interesting space for us. When a patient has a knee or hip replacement, they’re on opiates for a few weeks. A percentage of patients will wind up turning to opiates over and over again. The less opiates you have to use upfront, the better it is for combating the opioid epidemic.”

It was an exciting and refreshing conversation to have. In my time within the larger mental health treatment industry, I have repeatedly been impressed with the people and organizations willing to stand up and do something to help.

Vitalis is one such example, and with results expected very soon, we may see in the very near future the kind of good a more accessible and effective oral ketamine treatment that can contribute to society at large. The team at Vitalis assured me that, above all, that was their goal.

“Vitalis is taking a patient-centered approach to using ketamine in a safe, effective and beneficial way. Taking on the opioid epidemic is a priority as a major social issue in our country.

It means a lot to us to help the epidemic and to help patients.”

The Missing Link: Four PM’s Matthew O’Brien on the Future of Cannabis

How Mental and Physical Health Are Connected

The Right to Pursue Happiness: What That Means for Mental Health

Ketamine for Depression Kaeli Swaggerty - February 16, 2021
0
Navigating the Mental Health Side of TEDTalks In recent years people have been more open to the topic of mental health, but it can still...

Ketamine for Pain Nathan Graves - January 28, 2021
0
It used to be you had to keep your ear to the ground when on the lookout for news in the ketamine therapy community....

Mental Health Nathan Graves - January 19, 2021
0
It’s been a difficult year for introverts. Sure, you might think isolation and social distancing sound pretty nice to a loner, but it’s not...

The Missing Link: Four PM’s Matthew O’Brien on the Future of...